1984 and the Orwellian seer Bob Dylan. Chinwagging with The Big Zee in his trailer before the gig, him asking you ’bout that guitar-toting buzzard Johnny Thunders who you’d introduced him to at a Link Wray show in London some six or seven years before. Dylan had been kinda startled as Johnny reached out for Bob’s wet fish handshake. Said he’d never heard of The New York Dolls, was more interested in where he could get a new coat.

Sid Vicious’ Nancy wobbled up, tits hanging out and eyes closing down. This apparition heaves itself onto Dylan’s skinny bosom, she a sloppy floppy messy deadweight bodybag of mascaraed custard landing heavily onto the poet’s ribcage unprotected by Dylan’s tatty old leather coat that he’s had for ages. Dylan winces.

“Sex!” this clinging eyeshadowed amoeba blurts out to The Voice Of A Generation who twitches like he’s stuck outside of Mobile with the Memphis blues again and as he tries to free himself of this snaily woman he shakes his shoulders, Bob Dylan the frazzle-haired and frazzled creaky old rumba dancer at the YMCA with a junkie on his back.

You explain to Bob that Sex is the clothes shop run by Vivienne Westwood and her partner, the wideboy rock’n’roll manager Malcolm McClaren. “They sell coats and stuff, bondage gear”. Bob perks up perceptively. “Rubber stuff?” he queries. “Malcolm managed the Sex Pistols” you soothe. On cue, The Voice Of Degeneration shrills out like a petulant lost baby seal. “Nance-yyy!” It’s Sid, calling out for his monkey minder and her mind-numbing medicine.

Later that night Sid asks you to be his manager. “Malcolm’s your manager” you point out. Sid had an expedient way to get out of his contract. “I’ll cut his fuckin’ throat”, chortle chortle snivel snot, wipe nose on leather jacket sleeve. At least Sid was polite enough to wipe his dribbling nose on his own leather jacket. You, you’re already managing Johnny Thunders – full-on too much JT junkie bizness, a true-blood Noo Yoik rock’n’roller as magic as Gene Vincent Meets Keef Richards, turning himself to shit with smack.

Johnny and Sid have already played live at The Speakeasy as The Living Dead. Well, Sid climbed up onto Johnny’s stage and stumbled off again. Now they want to call their group The Junkies. Things like that could do your head in. I don’t think Bob Dylan ever got his new coat. The NME had a photo of me’n’Bawb at the Link Wray gig. What can you do? 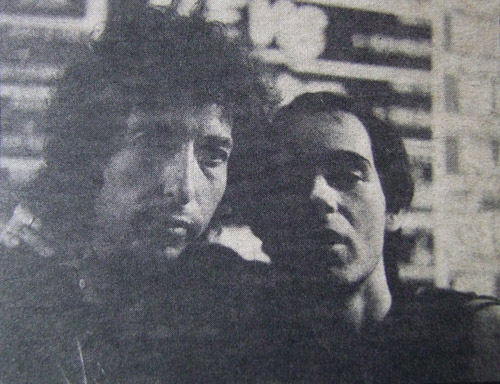 Bawb’n’BP at the Link Wray/Robert Gordon gig at The Music Machine – image from NME June 24th 1978. Photo of Dylan/Fallon by Sarah Wyld.

So now we’re back at Slane watching Paul Brady honoured to show this gnarled lizard how to play The Lakes Of Ponchatrain in this crappy trailer by the banks of the Boyne. Bob does just fine, fumbles and mumbles and shy ‘Aw shucks’ cowpoke grin as his long fingernails scratch at an acoustic guitar.

Now Bob is out in the sunlight by the Boyne’s dancing waters, fondly recalling Liam Clancy and Tommy Makem and Liam’s brothers and the friendship they’d bestowed on him when he first arrived in New York, the huge influence they’d had on him, eulogising The Clancy Brothers as film cameras capture the bashful bard paying tribute to his back pages. The filming, it’s for a Clancy Brothers documentary.

And now you’re standing on the side of the stage with Patsy watching Bob Dylan and his band rockin’ out like electric methedrine with lumps in it and there’s Bono and Ali taking it all in too.

Van Morrison shuffles up to where we’re standing, picks up an acoustic guitar, puts it down, looks grumpy. You look at Bono and he looks at you and the vibe is ‘Aw, fuck, doesn’t look like Van will sing with Dylan now’. But of course Van does, the ornery bastard, goes on and has Dylan singing with him on Van’s own Tupelo Honey, the two voices clashing and meshing and dancing around each other like refreshed lovers probing. The Goat On The Barbed Wire Fence and The Mighty Lion’s Roar are now singing Bob’s It’s All Over Now Baby Blue together and untogether and it’s poetry emotion.

“Take what you have gathered from coincidence…” You know a couple of guys in Dylan’s combo. That’s why you and your girl are here at Slane in such an exulted viewpoint. You trip over a wire causing the PA to stab out a sharp metallic crackle and Dylan jumps back from his mic all shook up and you put on your best ‘What, me?’ face and hide behind Patsy.

There’s Mick Taylor from The Stones twanging majestically, his guitar like liquid mercury. And over there, the keyboards swirl from the fingers of another dear chum from the rock’n’roll daze, this lovely grinning diamond Ian MacLagan, he from The Small Faces/Faces/Stones and more. He wrote about this special day and this night-until-dawn in his book All The Rage, Mac did, this very last night of this European tour.

Ah, yes. Maybe it’s odd but you feel proud of these guys as they play behind Bob Dylan. It’s very warming. Many rivers to cross and they’ve burnt a few bridges, come out from the storm to find the blessed chalice now sometimes free from harm. Instant calmer’s gonna get you. And His Master’s Voice, it’s wheezy and raspy and magic and sinewy like a snake from the Book Of Isiah, curling around Van’s magnificent full-chested roar of redemption. “She’s as sweet as Tupelo honey” indeed. Perfect. 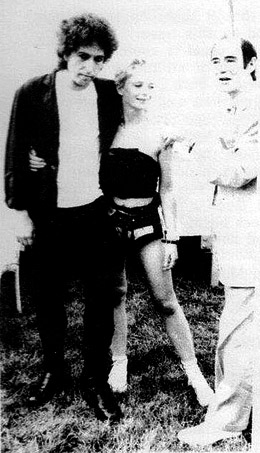 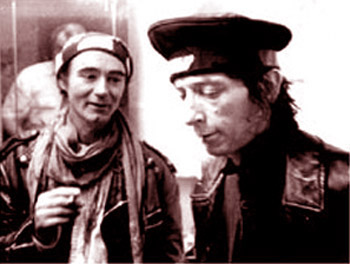 “Thunder on the mountain and there’s fires on the moon
A ruckus in the alley and the sun will be here soon
Today’s the day where I’m gonna grab my trombone and blow
Well, there’s hot stuff here and it’s everywhere I go…”
-Bob Dylan, Thunder On The Mountain