“So it’s John Lennon’s 75th Birthday, God bless him. I’m very sad he’s not here and I’m very glad that he was. Glad? John Lennon changed my life, he changed everything for so many people, he and The Beatles and beyond. The world will never be the same, thanks to John and his chums.

“And yet… Give Peace A Chance. Yes please. We need it now as much as ever – wars all over our battered yet still blessed planet, lunatics rushing around with guns, this uncertain globe melting from greed and stupidity.

“Did John Lennon save the world? No. But he gave it a try in his naive and magical way, Dr Winson O’Boogie from Liverpool, England, with his guitar and his music and his aspirational and inspirational thoughts.

“Was he perfect? No. Strangely strange but oddly normal, a fallible human being like all of us, not some deity but an enormously special and gifted rock’n’roller who reached out. John, thank you. We love you. Rest in peace”
– BP Fallon, October 9th 2015

John Lennon & The Plastic Ono Band and the classic performance of Instant Karma on BBC TV’s Top Of The Pops Feb 12th 1970. 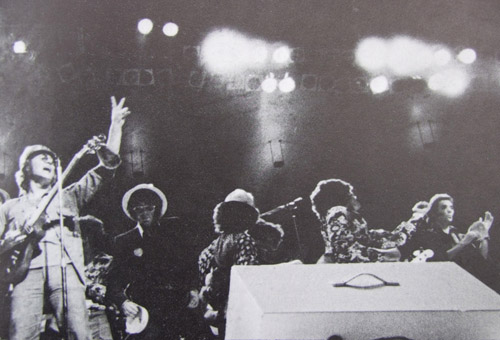