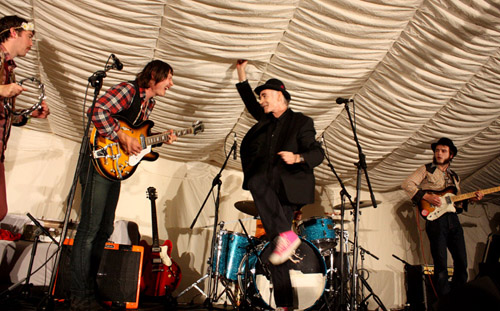 BP Fallon and Dublin’s honeyskippin’ vibers The Hot Sprockets teamed up for the first time ever to perform twice at the Electric Picnic Music And Arts Festival in Ireland.

Playing the songs written in America by Mr Fallon & his Bandits, the five-piece Dublin combo plus the Irish lead vocalist from New York made their world debut at Salty Dog – the enfant terrible of the Picnic, in the woods on an abandoned old wreck of a boat with a stage miraculously attached – for what BP had earlier described as “a little taste”.

This meant roaring through I Believe In Elvis Presley and Cold Chills and Does Anyone Care What Anyone Says In Rock’n’Roll like a train on fire with the guitars of Soper and Tim blazing and BP doing his strange dances. Quite incredible. And the packed audience thought so too, screaming their appreciation there under the trees as above the moon winked and all was right in the world for a moment.

Then came BP Fallon & The Hot Sprockets in the Leviathan tent in MindField. The tent, with sides removed to allow for more people, was stuffed. Apart from newly-converted fans who’d been blown away by the Salty Dog experience, many in the audience didn’t quite know what to expect. Sure, they’d heard BP talking about it on the radio, heard his record with Jack White, somehow felt that this was the right place to be right now… but still. Hot Sprockets devotees probably wondered too. Because of this, a huge sense of anticipation mixed with curiosity hung in the air like an invisible question mark. 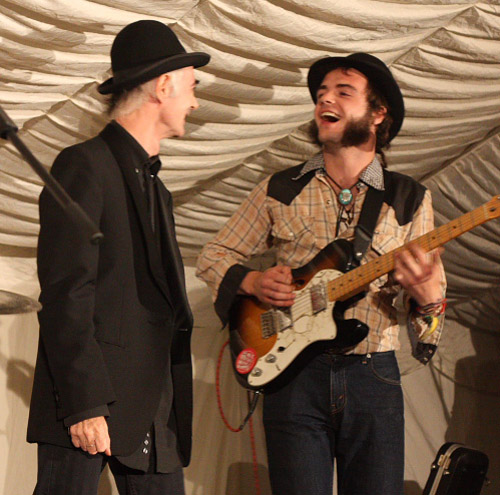 Then BP backed by the Sprockets, they blast off straight into Does Anyone Care What Anyone Says In Rock’n’Roll and it’s a done deal, everyone into it straight away, the audience, the band, the LV, everyone here off on a sonic rampage together. And sixty minutes later and six songs in total it all explodes into the potent poetry’n’blues tale of Van And Gloria, the audience joining in lustily on the seductive chorus and rocking out as much as the band who are choogling very nicely indeed, Fallon the ringmaster in his rock’n’roll element. It’s vibey and uplifting and thought-provoking and sometimes a bit out there and maybe a bit mad – what rock’n’roll is meant to be.

Smiles all round and the applause is mega. 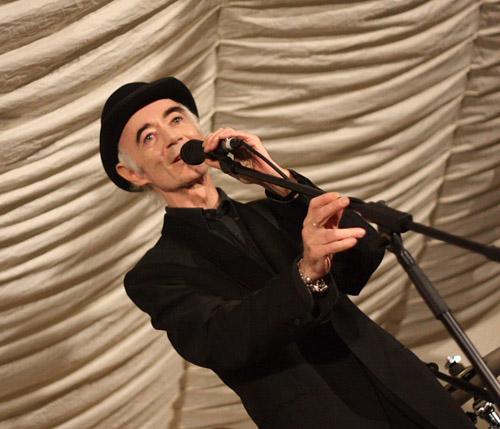 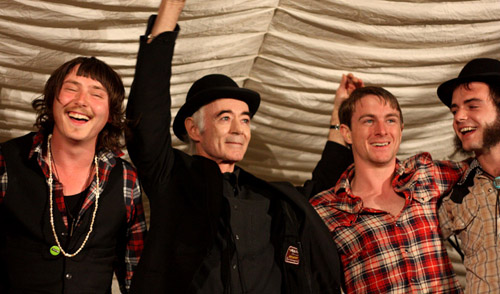 Taking a bow: Soper & BP & Joe & Tim with Franky & Andy out of frame
by the ubiquitous Barney @ lib-lab

Without Whom Dept at Electric Picnic:
The extraordinary Naoise Nunn and his magnificent team at MindField.
Hugo Jellet and Liam and the sublime Salty Dog crew. Present Tense.
Marty Mulligan from Mullingar & Bipolar Empire. Richard Walshe.
Musical midwives: Kay Gourley & Frank Murray via The Mighty Stef.
Elaine Byrne and her EP colleagues. Mick Devine. Séan with a Fada.
And Mick Jones to the rescue with the timely BAD food voucher.
You. With appreciation x