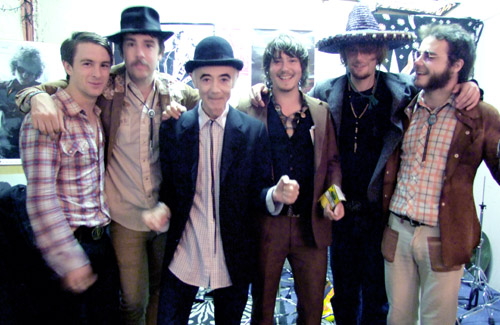 BP Fallon & The Hot Sprockets – with Dylan lurking stylishly on the very left – by Peter Pureheart.

BP Fallon singing his songs with Dublin’s Hot Sprockets for the first time ever, talking with Bob Geldof in MindField probably about whatever comes into their heads, a speedy recitation… herewith the programme:

Sunday 3:00pm @ Ignite in the MindField area
BP Fallon kicks off this year’s Ignite with a five minute recitation. Hit, git and split. 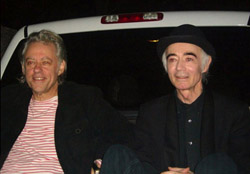 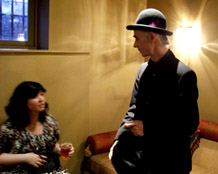 Sunday 5.00pm @ MindField in the Leviathan tent
Bob Geldof and BP Fallon and – from Tieranniesaur – Annie Tierney discuss the future of the future and music, moderated by David McWilliams. This’ll be very vibey and probably fiercely irreverent.

Sunday 8:00pm @ Mindfield Finale Party in the Leviathan tent
BP Fallon & The Hot Sprockets (full set). The rock’n’roll poet gets choogling backed by the blueswailin’ honeyskippin’ cats from the Southside delta of Dublin. We can’t help it – Sprocket to me, baby!

BP on The Hot Sprockets: “I love their ‘Honeyskippin’ album and went to meet them in Dublin at their rehearsal space and there on the walls are their posters – Son House, Neil Young, Bob Dylan, The Raconteurs, Blind Willie McTell, John Lee Hooker and Led Zeppelin. I thought ‘That’ll do!'” 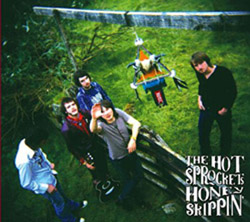 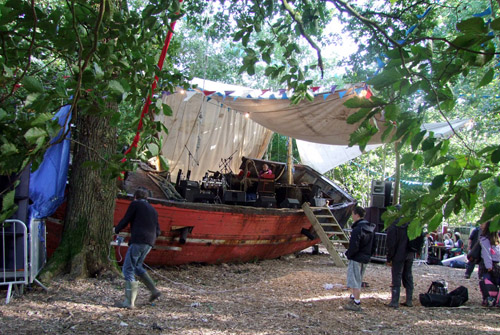 The Salty Dog stage in the woods before the deluge, by BP Fallon. We jest you not! 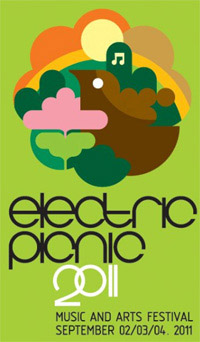