“I’m going to be like me!” – The Slim Harpo Trick by BP Fallon 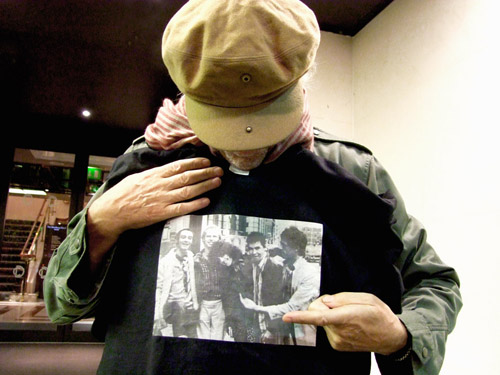 Bob Geldof and groovy t-shirt which he presented to the photographer, Dublin Sept 23rd 2013. He’d just flown in from the F1 Grand Prix in Singapore where he and his Bobcats had played alongside Rihanna and Justin Beiber (as one does). Photography by & © BP Fallon. Photography on t-shirt – BP Fallon & Jeff Dexter & Marc Bolan & Boomtown Rats Johnnie Fingers & Bob Geldof in 1977 – by & © Kevin Cummins

The reformed Boomtown Rats play in Dublin tonight (Sat) and tomorrow night (Sun) at Vicar Street. October 21st sees the release of all six Rats albums in a box set. BP Fallon – who was their publicist when they started off – writes the press release.

“I’m going to be like me!” – The Slim Harpo Trick
by BP Fallon

1977 in England and six intelligent gobshites over from Ireland, laying waste to punk’s sacred creeds as the lead singer announced “I want to get rich, get famous and get laid”. It wasn’t the first of the fellow’s pronouncements. He went on to save the world for a while, thus effectively wrecking his music career forever. But that’s another story, not fit for these polluted paragraphs.

Geldof was the singer’s name, Bob Geldof. People called him Geldorf and, in America, Bawb. He was always writing great songs, playing ‘em badly on a left-handed acoustic guitar for the band. And he was a gangling fashion mess of red trousers held up with string and an oversize chequered jacket that would’ve been better served for noughts and crosses rather than daywear. And Geldof’s gob – the girls liked his Jaggeresque lips and the girls, they understand – his rubber mouth flapped like someone versed in cunning lyrics, announcements, pronouncements, opinions, let’s do this, let’s do that. With him it was always “Why the fuck not?”, which seemed a reasonable response to anything. Of course he got up a lot of people’s noses, people who thought this Geldof geezer was a jumped-up self-opinionated self-promoting Paddy git. But like some things that get up people’s noses, Geldof and the group he fronted – the group he drove – became extremely popular. Thatcher’s repressive drab Britain was being assaulted by rebel music and the youth was revolting and these guys, ahead of The Pistols or The Clash or The Damned, they scored the first No 1 hit from the punk rock melee. They rocked like fuck and even did ballads, used saxophones and strings when they wanted or looped into reggae. They became Rock Stars. Wham bam thank you ma’am.

They were called the Boomtown Rats, after the new gang in town in the Woody Guthrie book Bound For Glory. In Dublin, for the briefest of moments, they’d called themselves The Nightlife Thugs but knocked that on the head. Geldof would jump onstage by ripping through a cheap screen that beamed a Rentokill promo film they’d blagged from somewhere – all about killing rats, real tasty stuff – and he and the Boomtown Rats would be all cranked up breaking the speed limit into Bobby Parker’s Barefootin’ or The Coasters’ ‘Riot In Cell Block #9’ and bits of raw liver would be flying about like airborne corpse-cold jellyfish, landing on people, splat! Charming. And people went nuts of course, just loved it.

And this mighty band: Garry Roberts, leather jacket and Dee Dee Ramone hair which morphed backwards into an evil flat quiff, pushing madly on guitar, dangerous. The shaded Gerry Cott who looked almost like a mod and seemed like the sort of sensible chap who’d end up in music publishing, Gerry twanged derangedly too.

Pete Briquette, the only rock star named after a compressed lump of turf, as solid a guy as the bass he was playing, a country boy from Cavan while his cohorts were wellish-bred city boys from near Dublin. Thrashing the drums, Simon Crowe, the straight blonde motorbike boy handsome like a World War II flying ace…

And on straight-to-the-point keyboards was Johnnie Fingers, a fine carefree chap who wore his stage gear all day long and thus ended up sporting pyjamas for years.

In England the band were signed by go-getters Nigel Grainge and Chris Hill for their brand new label Ensign. Doreen Loader in the Ensign office was almost like everybody’s mum.

These adventurers newly over from Ireland were a a self-contained combat team, suitably quartered near Chessington Zoo in a house built by Henry VIII for one of his mistresses.

Polygram Records released a sampler LP called New Wave ’77. Tucked in among Richard Hell & The Voidoids, The Ramones, Patti Smith doing Piss Factory, The New York Dolls, The Runaways, The Dead Boys with Stiv Bators and Sonic Reducer…there was the Boomtown Rats and Geldof’s clarion call ‘Lookin’ After Number One’, an explosion of drums and guitars and the singer screaming “World owes me a living!” right from the off. No messing, here I am, don’t fuck with me. “I’m going to be like me!” That was it.

Charles Shaar Murray in the NME went bonkers for the track. It became The Rats’ first single and the first Rats hit. The Rats got on British television on Marc Bolan’s afternoon extravaganza Marc and as that was being screened they were doing Top Of The Pops. Wham bam thank you man.

The Boomtown Rats were the first modern Irish rock’n’roll group. Rory Gallagher plumbed the blues, Phil Lynott hoovered up Irish mythology, Van Morrison breathed the Celtic mist. And the Rats….who gives a toss that they were 6 middle-class fellows from the sorta- affluent Dublin adjunct of Dun Laoghaire. We’ve all got our own pain and they loved rock’n’roll and hated the moribund cesspit of not only the Irish music scene but the whole damn country itself. These upstarts had their own agenda.

Bono talks about as a kid being electrically energized by the liberating sight of this scruffy Geldof on Ireland’s Late Late Show, this unafraid young Boomtown Rat verbal pugilist lashing out at the stultifying apathy of the Catholic Church, the overall crushing gray mundaneness of Ireland as the country’s leaders wallowed in some cod-50s “Ah sure it’ll be grand, it could be worse” complacency. Geldof’s song ‘Banana Republic’ was to become a kidney punch.

The Irish music business was sewn up. Second-rate shysters managing showbands, these lame human jukeboxes peddling tired Jim Reeves tear-jerkers bubbled up with a dose of Simon Says. The showband managers and the politicians seemed interchangeable: one becoming a senator and another a man who ran ballrooms became the head of the country while making dog food. It was all the same racket.

Suddenly half the population in Ireland was under 25 and suddenly with this Geldof guy they had a voice. The Boomtown Rats were banned, prohibited by law from playing live. They were denounced from the pulpit. It was Don’t Knock The Rock all over again; it was Would You Let Your Daughter Marry A Boomtown Rat. It was perfect.

Back in England in London at the Music Machine just before the Rats rocked into ‘Lookin’ After Number One’, some mentally-derailled geezer leapt up from the audience and before fleeing whacked Geldof a ferocious punch on the gob. Bloood everywhere and a stroke of good fortune. The outraged photos of the bloodied but unbowed Geldof adorned the next week’s music papers in grand style. Punk rock.

The first Boomtown Rats tour in Britain found them playing with two hot new groups from New York. Six Paddies, eight Yanks. Talking Heads would go on first, then the Rats, then the Ramones would finish the delirious audience off. Some of the shows were in the afternoon, in school, in the gym, for kids in mullets, flares and shock. Goodbye Mud. So long Showadafuckingwaddy. Hello New Age. That was perfect too.

That’s how the Boomtown Rats began. Fucking brilliant. No messing.

The rest is here.

See more at Louder Than War 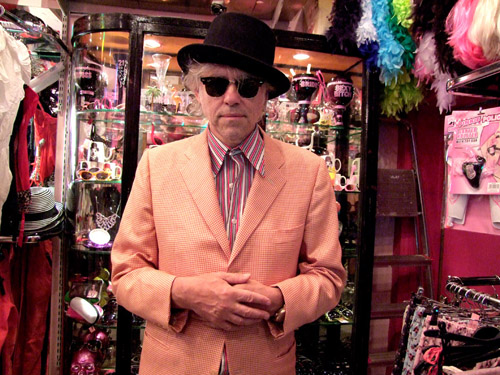 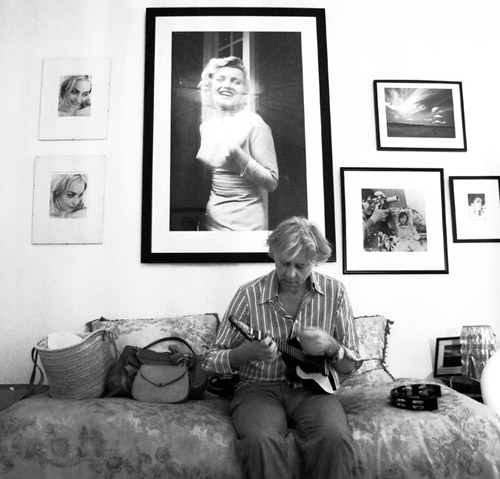 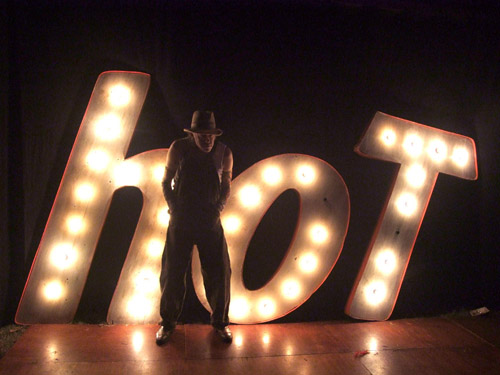 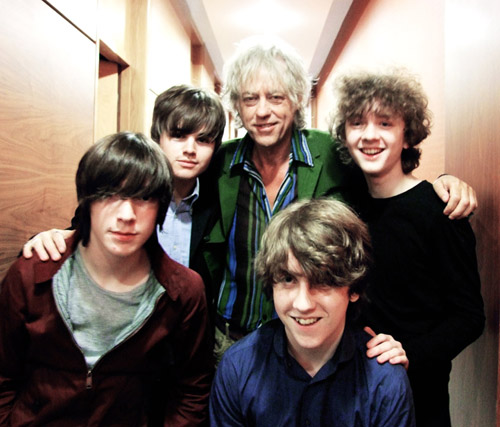