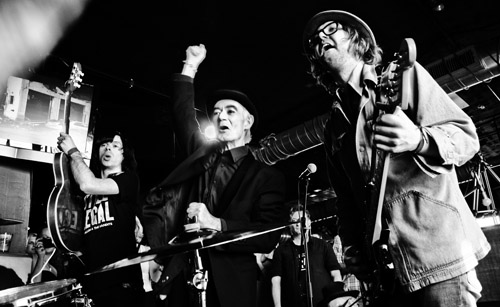 The last time I had occasion to write about my old friend BP Fallon in Uncut was in March, 2010, when he’d just released his debut single, produced by Jack White and released by Jack’s Third Man Records as the first in the label’s new Spoken Word-Instructional Record Series. ‘Fame #9’ was backed with ‘BP Fallon Interview By Jack White’ and ‘I Believe In Elvis Presley’, on which White played some viperish slide guitar, with The Raconteurs’ Patrick Keeler on drums. There was also a video, featuring some of BP’s many friends, including Kevin Shields, Bobby Gillespie and Gemma Hayes.

Readers whose memories are still more or less intact may recall me writing about Beep as someone who had loomed large in my life since my very early days on Melody Maker, which I had just joined as a ‘junior reporter’. I first met him in 1974, at a Roy Harper show I was reviewing at Kensington Polytechnic. I recognised him from a photo that had appeared in MM of him interviewing John Lennon and Yoko Ono at the Amsterdam Hilton, where they were holding what I think was their first Bed-In. Lennon was smitten enough with him for Beep to later turn up on Top Of the Pops as a member of The Plastic Ono Band, ‘playing’ bass on ‘Instant Karma’.

Beep was, famously, a self-styled ‘media consultant’, often also described as controversial, since he had an inclination towards the kind of colourfully outlandish behaviour that had made him as legendary as some of the people he has worked with over many years, including Marc Bolan at the height of his popularity, Led Zeppelin, Harper, Ian Dury, The Waterboys and U2. He was what I suppose you might call a ‘scenester’ and that night backstage with Harper I introduced myself and was very quickly regaled with many hilarious tales that he told in a hipster Esperanto of his own sublime invention that was nothing like anything I’d ever heard.

I was beguiled to the point of impressionable infatuation and many colourful adventures ensued as we became friends, a night out with Beep not something you would easily forget. Wherever we fetched up, there would be people he knew, and what they had in common was that they all clearly loved Beep, who was popular with everyone, including people his various antics had at times in their relationships with him caused them no end of exasperation. His company is a blessed thing to recall.

Anyway, I return to BP now, because when I recently got back from a quick trip to Los Angeles on urgent Uncut business, there was a package waiting for me at home, sent from Texas, that when I opened it to my amazement contained a CD called ‘Still Legal’, credited to BP Fallon & The Bandits. And there Beep was on the cover, unmistakably groovy in a picture where he was flanked by his band, The Bandits: former Blondie bassist Nigel Harrison, Aaron Lee Tasjan who has played guitar with The New York Dolls and Blondie drummer Clem Burke.

The CD turned out to be a gas and was followed not long after by an email from Beep, who had just played the South By South West festival in Austin, with The Bandits, augmented for the occasion by Stooges drummer Scott Asheton and Primal Scream guitarist Barrie Cadogan, pictured below with The Bandits. 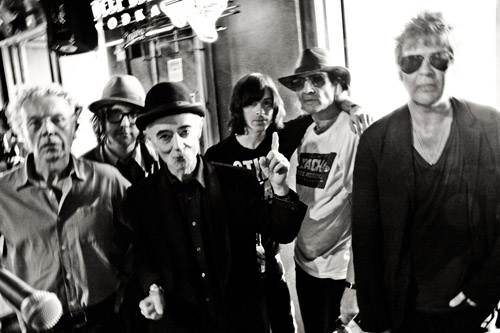 Here’s what Beep wrote, inimitably, plus a clip of him and The Bandits:

“Never thought I’d be sitting here in Texas emailing you re my rock’n’roll band. Never thought I’d be sitting anywhere telling anyone about my rock’n’roll band. Yesterday I played the test pressings of our LP ‘Still Legal’ from United Record Pressing in Nashville. Fuck, Allan. To hold this 12″ record with my music on it, to look at the grooves, to look at my little message in the matrix… to play the thing, round and round and now – nervously, excitedly – the very first hit of the needle going into the vinyl… and then – bam! – Clem’s drums kicking off this crazy mad rock’n’roll adventure.

“All this is ludicrous of course – the 109 year old rock singer and his lyrics and his bunch of… well, Bandits. We write the tunes together. Unhumbly, I believe we’re fucking great, what rock’n’roll is meant to be, an incredible band on fire with the guitar player Aaron Lee Tasjan a young legend-in-waiting. Catchy songs written in New York about lust and mutual infidelity, drugs and Jesus and models and – as one does – Bob Dylan and Columbus… and sometimes love and the passing of time, age and agelessness… Us Bandits, we have a laugh and we take it very seriously. I’m having the time of my life. Never thought that this would happen. Thank/blame Jack White for lighting the… whatever he lit/set free/unwittingly unleashed. I mean it (man).

“At SXSW the promo said “BP Fallon is the most interesting new singer in rock’n’roll”. It might even be almost true. If I could wave a wand, we’d do dates in Britain and Ireland with The Strypes and Jake Bugg – it’d be three new bands all loosely drawing on the same well, which is rock’n’roll unfettered and unhomegenised. Rock’n’roll should have a hard-on, not some limp-dicked weediness. Sensitive, yes, but not dribbling like a wimp. Get a grip! And it should be fun and uplifting and out there – and it’s time for less segregation between the band and the audience. We’re all in this together. Good morning.

BP Fallon & The Bandits – The War To Fight For Love

“Whatever… it’s a crazy story. I’ve discovered that being in a band is one of the best ways to hear music. If, say, I want to hear more drums, I simply have a choogle nearer to Clem… or to Scott Asheton. It’s a hard life. Seriously, I’m more than blessed to have guys of this calibre allowing me to have a band with them. Someone said ‘Put a sticker on your album – “Contains 3 Members Of The Rock’n’Roll Hall Of Fame!”’ Well… no. Sometimes I do go ‘Fuck! That’s Scott who played on ‘I Wanna Be Your Dog’’ or it flashes on me that my friends playing behind me are the chaps who powered all the Blondie hits like ‘Heart Of Glass’ or ‘Atomic’ or ‘One Way Or Another’ which Nigel wrote with Debbie Harry and has just been a huge hit again, for One Direction which is a hoot. Am I the new Debbie Harry? I feel more like Gene Vincent on acid.

“I wore his leather jacket once, the one with the medallion on his LP covers, at York Rialto when I was a schoolboy and he was doing a sound check. I asked him ‘May I put on your leather jacket, please?’ and he took it off over his head and the greasy grapes of quiff falling into his eyes unfurled even more and I put it on and it was quiet tacky close up and The Outlaws who were backing Gene coaxed him into singing the Bill Monroe hepped-up country viber ‘Rocky Road Blues’ and Gene clung onto the mic stand and his eyes gazed up forlornly to God knows where and then a gleam came into them and this miraculous voice of wounded freedom soared out, ‘Weeeell, the road is rocky but it won’t be rocky long…’ Ah yes. Magnificent. And then suddenly these little old ladies, these little blue haired old dears, are swarming into the auditorium like enthusiastic ants, all cardigans and handbags and excited chatter. It’s – God help us – afternoon bingo time. Gene and the band grind to a halt and Gene haltingly asks me for his leather jacket back, saying ‘I’d better put it back on before the faces see me.’ The faces. Wow. Cool American slang. But bingo? What the fuck. What about ‘Be Bop A Lula’, mister?”

There was more, as there always has been with Beep, including a recent picture of him with Willie Nelson (see below). “Did we have a joint or two?” Beep asked. “A gentleman doesn’t tell.” 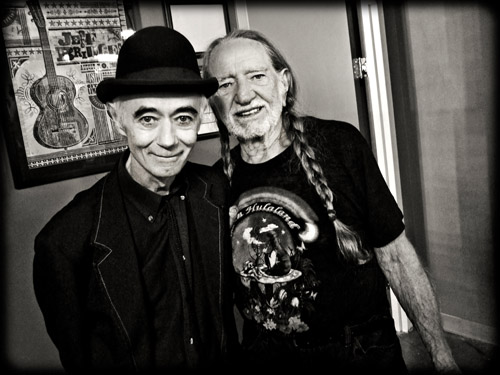 On The Nature Of Electricity & Acoustics Wang Dang Doodle BP Fallon ~ the movie?