This NBC Nightly News report of July 31st 1973 suggests that there is a link between organised crime and the US record business, mentioning drug dealing, payola, mob connections and high living – and then reports on Led Zeppelin with rare film of the band and friends on their private plane Starship.

“The Shah Of Iran? No. J Paul Getty? No. The occupants of these limousines don’t rule countries, don’t make oil deals, they don’t even make million-dollar movies – but they live as if they did all of those things. In their 20s, they are rich, powerful, temperamental and pampered. They are The (sic) Led Zeppelin.

“To get around, Zeppelin uses a chartered 707 – the kind of plane President Nixon uses. The President’s plane doesn’t have an organ nor a fifteen-foot mirrored bar nor in the private quarters does it have two bedrooms and a fireplace. Nor does The President travel with an entourage that looks like this…” 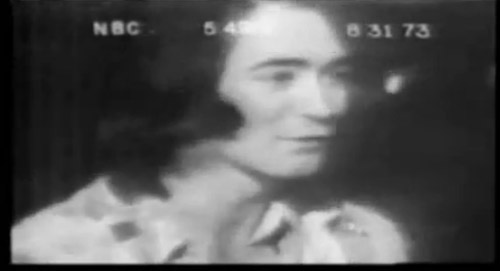