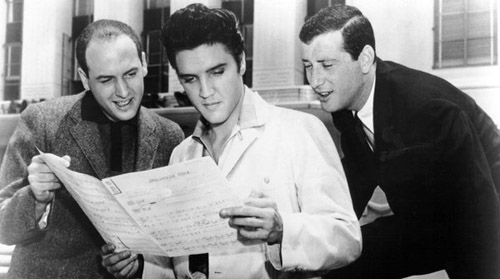 Jerry Leiber, the lyricist who with his partner Mike Stoller wrote some of the greatest rock’n’roll songs ever including ‘Hound Dog’, ‘Stand By Me’, and ‘On Broadway’ died yesterday (Monday) in Los Angeles. He was 78.

Through their effervescent songs that both celebrated and defined the twin births of rhythm’n’blues and rock’n’roll, jerry Leiber and Mike Stoller not only documented the emerging 50s teen soundscape but created it too.

In 1952 Leiber and Stoller wrote ‘Hound Dog’ for the earthy blues singer Big Mama Thornton. The song became an enormous smash for Elvis Presley in 1956 and made Leiber and Stoller the most happening songwriting team in rock’n’roll. They later wrote ‘Jailhouse Rock’, ‘Loving You’, ‘Don’t’, ‘Treat Me Nice’, ‘King Creole’ and other songs for Elvis, despite disliking El’s interpretation of ‘Hound Dog’.

Their hits for the Drifters pictured New York like Chuck Berry pictured America, classic cuts like ‘On Broadway’ written with Barry Mann and Cynthia Weil and ‘Stand By Me’ with Ben E. King. With Phil Spector, Jerry Leiber wrote the Drifters hit ‘Spanish Harlem’.

They wrote a bunch of hits for The Coasters that raucously celebrated the fun of youth, including ‘Charlie Brown’, ‘Young Blood’ with Doc Pomus, ‘Searchin’’, ‘Poison Ivy’ and ‘Yakety Yak’.

Well, it wasn’t then but it is now.