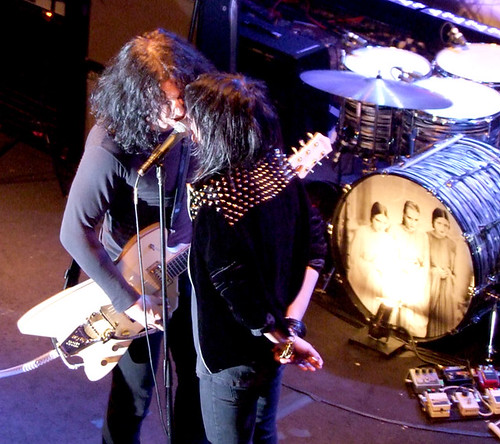 The Dead Weather are the best new band in America. It’s not a race and who’s counting but there it is. Wham bam thank you man.

Are we biased? Fuck yes.

Announced only days before the gig and sold out in less than a minute, The Dead Weather’s appearance at Williamsburg Music Hall was nothing less than stunning, ranging from the rampaging raunch of ‘I Cut Like A Buffalo’ to the swamp-country seduction of ‘Will There Be Enough Water’ with Jack White leaving his treat-me-like-your-motherfucking drumming for a mo’ to play searing guitar as he and Alison Mosshart burn vocals into the same mic.

TDW’s choice of covers alone is reason enough to be a believer: Jack’s dramatic reading of the Van Morrison/Them song ‘You Just Can’t Win’ and Dylan’s ‘New Pony’ being rocked out of its revered socks. And alongside the pummeling ‘Trampled Underfoot’ Led Zep groove that guitarist Dean Fertita and bassman Jack Lawrence bring to ‘Child Of A Few Hours Is Burning To Death’ by The West Coast Pop Art Experimental Band, we get hot new songs like ‘Jawbreaker’ all stacatto crunch that roars plus Alison’s feral stylings in the jittery ‘No Horse’ and Mr White’s explosive twanging in ‘I Can’t Hear You’. Sonic dynamite. 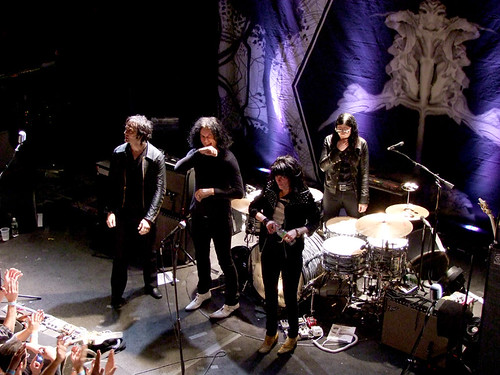 Permit us to recommend the new Dead Weather digital release, an unannounced EP ‘Live From Third Man West’ which features five songs and four videos from their performance at the Third Man Records pop-up store in Los Angeles in August. Available through iTunes.

And meanwhile Jack White has been producing The Queen Of Rockabilly herself, Miss Wanda Jackson. ‘Let’s Have A Party’ indeed! Amazing. Wanda hails Jack as “one of the biggest stars on the planet” and the pairing may sound similar to what Jack did with Loretta Lynn for her 2004 Grammy-winning record ‘Van Lear Rose’ – but 2009 Rock’n’Roll Hall of Fame nominee Wanda says “They had a super album but he didn’t have her do anything different, you know. She just did her little Loretta Lynn songs. But he told me he’s gonna stretch me some, so we’ll see.”

Says Jack of working with Wanda: “It was just supposed to be a seven-inch [single] but we did a lot more songs, so maybe it will be something bigger. There was a lot of good stuff. It’s a wild record.”

Photography: Wanda Jackson and Elvis 1956 photographer unknown. In the mid-50s Elvis and Wanda toured America’s Deep South together and while they were dating he turned the country girl onto this new sensation he was helping invent called rock’n’roll.